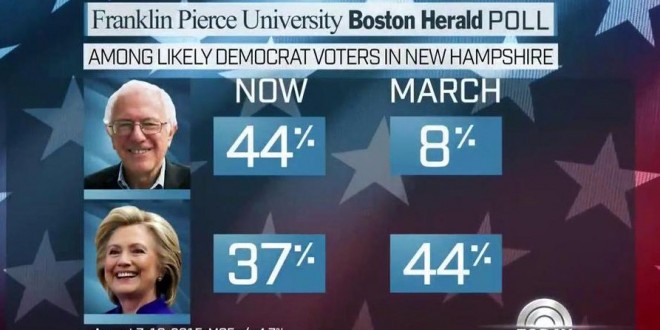 Sanders topped Clinton with 44% compared to her 37% support among likely Democratic primary voters, according to a Franklin Pierce University/Boston Herald poll. Sanders has been gaining momentum as he generates enthusiasm among the Democratic Party’s progressive base but until now he has still trailed Clinton in every early state poll. Clinton continues to enjoy more than double Sanders’ support in national polls, though that polling has also shown Clinton’s vulnerabilities as voters question her honesty and trustworthiness. Vice President Joe Biden, who is reportedly still considering whether to enter the fray, would start with a 9% base of support in New Hampshire if he decided to run, according to the poll. The bottom three candidates, former Virginina Sen. Jim Webb, former Maryland Gov. Martin O’Malley and former Rhode Island Gov. Lincoln Chafee, resonated with 1% or less of likely Democratic primary voters.