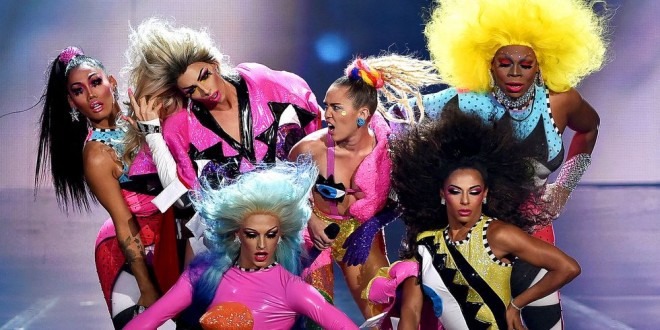 We’ll probably get another few days of “outrage” about Miley Cyrus after she closed out last night’s MTV Video Music Awards with the cast of RuPaul’s Drag Race and a few “crotch cannons” fired from between her legs. Yahoo recaps:

In swooped hostess with the mostess Miley Cyrus, a troupe of 30 RuPaul’s Drag Race queens, and a confetti-gun-wielding Wayne Coyne of the Flaming Lips – and that was the real mic-drop moment of the night. It was nothing less than an eleganza extravaganza. Performing “Dooo It!” – a pot-smoking anthem off her brand-new, Coyne-produced surprise album, Miley Cyrus and Her Dead Petz – Miley hit the stage in Day-Glo Jazzercize wear, while out sashayed all your favorite Drag Race covergirls, totally werking the VMAs runway and lip-synching for their lives: Shangela, Latrice Royale, Carmen Carrera, Vivacious, Willam, Gia Gunn, Miss Fame, Jiggly Caliente, Pandora Boxx, Sharon Needles, Alyssa Edwards, Courtney Act, Pearl, and many, many more. And of course, reigning champ Violet Chachki received special attention, enjoying some handsy, lip-locked action with the mistress of ceremonies herself.

Cyrus also announced that a surprise album, Miley Cyrus & Her Dead Petz, was available for free download, but the site immediately crashed and remains down at this writing. The coding on the clip below is funky, but you can view it full-screen.