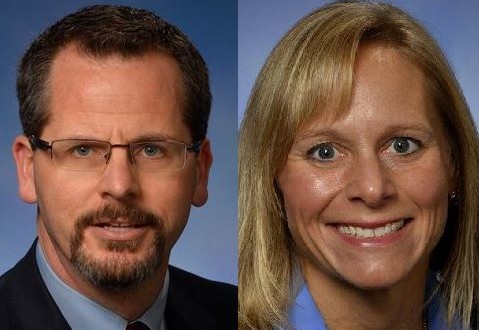 Michigan Tea Party Rep: I Made Up That Gay Hooker Story About Myself Because I Was Being Blackmailed

Embattled state Rep. Todd Courser, R-Lapeer, sent his own audio tape early Monday morning, saying he sent a false e-mail about paying for gay sex because he was being blackmailed. The long and rambling audio tape blames his former staffers, Ben Graham, Josh Cline and Keith Allard, for colluding with the Lansing “mafia” establishment to bring him down. And it didn’t work, he said, because he’s decided to stay in office to expose the “political shenanigans” that are happening in Lansing. “The e-mail was put in motion to disrupt the blackmailer and give me some clues as to the surveillance of my life. It was all done in a pressure cooker and … it put me in a situation where a bad choice was the choice that I made,” he said, noting the alleged blackmailer’s intent was to get him to resign.

Courser goes on and on about Jesus in the clip.

RELATED: Here’s what Courser has to say about gay marriage.

This decision will be a toe hold and from this decision we will see many more decisions that curtail our first amendment rights of free speech, freedom of religion, freedom of association, and of course freedom of conscience. This decision will unleash the power and scope of government to further society by its power of persuasion and its hammer of threat of governmental persecution. Every regulatory apparatus of government will be focused henceforth on indoctrinating children and the greater society that same sex marriage is moral and every bit accepted, preferred to traditional marriage. Anyone who disagrees with this new paradigm will be vilified as a homophobic bigot. Some of these activists are the most intolerant viscous hate mongers who will demonize anyone who opposes their tyrannical agenda. It works and virtually none are left in elected leadership who will now stand and oppose them publicly as they destroy our rights to freedom of religion and freedom of speech. If we do not act now we will see public officials, pastors, and private citizens alike being limited in what they can say or do. The effects of this decision, many unforeseen, on our nation and the world will echo through the end of time. It will destroy and tear down families and with it our social fabric of our society. We are indeed living in the last days. May God discipline and correct the hearts of our countrymen and in so doing may He once again bless the United States of America!

Previous Welcome To The New JMG!
Next Even More Infighting: Trump Vs Fiorina