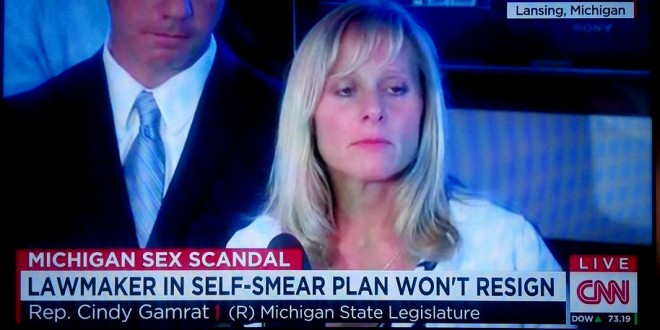 With her cuckolded husband at her side, today a tearful Michigan state Rep. Cindy Gamrat declared that she was not going to resign just because she got busted having an affair with a fellow representative of Christ Himself in the state legislature. Last week Rep. Todd Courser tried to throw attention off their affair by spreading a rumor that he’d been seen having sex with a male prostitute in an alley behind a nightclub. Because that always works. Before their affair was exposed, the pair had introduced a trio of anti-gay marriage bills that would have outlawed all civil marriages in Michigan.

Previous August 30th: Josh Duggar’s Victims/Sisters To Appear In TLC Documentary On Child Sex Abuse
Next Totally Not-Gay Catholic Priest Tells Ex-Gays: Homosexuality Is Like Trying To Eat A Bagel With Your Ear