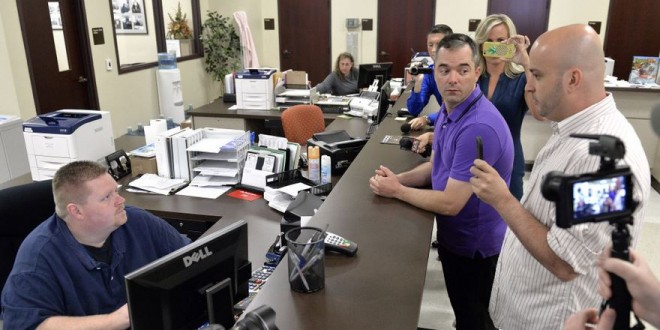 After being turned away for a marriage license for the third time last week, a Kentucky gay couple has sued Rowan County and clerk Kim Davis in federal court. Davis is already being sued by the ACLU. Via Lexington’s CBS affiliate:

The lawsuit was filed Aug. 25 in U.S. District Court by William Smith Jr. and James Yates, but a summons was delivered Monday to Rowan County Judge Executive Walter Blevins, who is named as a defendant with Davis and the county. Other defendants, including Davis, were expected to be served this week, attorneys have told WKYT. The lawsuit says Davis and Rowan County “willfully, intentionally, and with deliberate indifference” to the couple’s rights established a custom or policy to “refuse to issue marriage licenses to individuals eligible to marry in order to deny such individuals, including Smith and Yates, their Constitutional right to marry.” Smith and Yates suffered and “continue to suffer irreparable damage, including but not limited to embarrassment, humiliation, loss of family security and benefits accessible by other married couples,” according to the lawsuit. Smith and Yates are seeking a jury trial, a “reasonable amount” for compensatory and punitive damages and attorney fees. Davis has refused to issue marriage licenses, citing her Christian faith and constitutional right to religious liberty, despite a U.S. Supreme Court ruling on June 26 that legalized same-sex marriage in all 50 states. She is being sued by the ACLU because her office stopped issuing marriage licenses.

Yates and Smith have been together for nine years.

RELATED: It appears that the business day has ended in Kentucky without Davis issuing any marriage licenses, potentially opening her up to a contempt of court charge. Last week Rowan County itself charged her with official misconduct following a complaint by Yates and Smith.

Previous Liberty Counsel’s Mat Staver: All Kentucky Has To Do Is Take Kim Davis’s Name Off All Marriage Licenses
Next Facebook Hits Billion Users In Single Day