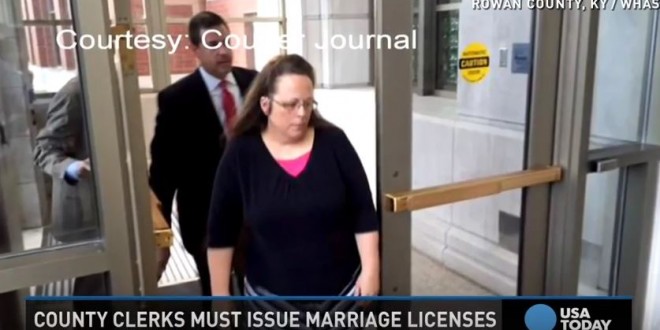 Late yesterday Kentucky county clerk Kim Davis was ordered to issue marriage licenses to all qualified couples. Yet this morning her office turned away two gay couples. Via the Associated Press:

A Kentucky clerk’s office has turned away two gay couples seeking marriage licenses, defying a federal judge’s order that dismissed her argument involving religious freedom. Hours after the judge’s order to issue licenses to same-sex couples, Rowan County Clerk Kim Davis’ office still turned away the two couples, one after the other, on Thursday morning. Davis has argued that her Christian beliefs prevent her from issuing licenses to same-sex couples. After the U.S. Supreme Court ruled gay marriage bans unconstitutional, Davis stopped issuing licenses to any couple, gay or straight. Five couples sued her, and U.S. District Judge David L. Bunning on Wednesday ordered her to comply with the Supreme Court’s ruling. On the street Thursday, gay-rights activists held signs reading “clerk not clergy” and “obey the law.”

Deputy county clerk Nathan Davis says that the Liberty Counsel has told them to defy the court while awaiting the appeal of yesterday’s ruling.

UPDATE: Oh, get THIS.

On Thursday, deputy clerk Nathan Davis, Kim Davis’ son, said the office was advised by attorneys with the Christian law firm Liberty Counsel to continue refusing same-sex couples as it appeals the order that was filed Wednesday. They told David Moore and his partner David Ermold, who showed up as soon as the doors opened, that they were not issuing marriage licenses. Davis’ attorneys at Liberty Counsel were not available for comment Thursday. They told WKYT they were in a prayer meeting. After being turned away by the clerk’s office, the couple went to the county judge executive’s office to see whether he would issue a marriage license. Moore and Ermold say he told them he didn’t have the required paperwork and that the issue would have to be settled by the courts. When they were turned away this morning Moore and Ermold got emotional. This is not the first time Moore and Ermold, his partner of 17 years, have been denied a marriage license by the Rowan County Clerk’s Office. Last Month, the couple tried to get a marriage license, but Kim Davis refused to issue it. They videotaped the experience, posted it on YouTube and it eventually went viral. “These people are cruel and this is wrong. And that’s how it is,” Ermold said. “That’s the bottom line. She’s wrong and these people are cruel to do this to us and that’s how I feel.”

UPDATE II: Davis has filed a motion for a stay on yesterday’s ordering pending the resolution of her appeal to a higher court.