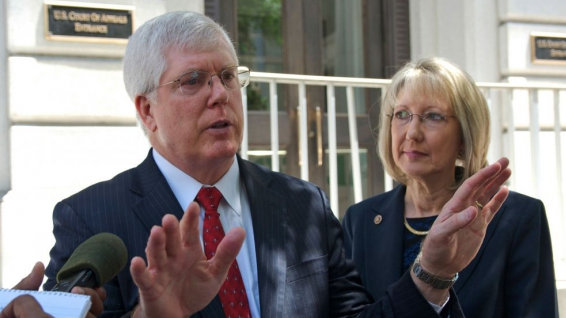 The Lexington Herald Leader has published a BLISTERING editorial which attacks the finances and motives of the Liberty Counsel in their defense of renegade county clerk Kim Davis. An excerpt:

Rowan County Clerk Kim Davis has chosen to prolong her moment in the limelight by defying a federal judge’s order to issue marriage licenses to legally qualifed people who apply for them. U.S. District Judge David Bunning kindly but firmly told Davis Wednesday that in our system her religious beliefs don’t trump the rights of the taxpayers who pay her almost $80,000 annual salary. Sharing Davis’ glow is Liberty Counsel, which describes itself as a nonprofit that provides pro bono legal representation related to “religious freedom, the sanctity of life, and the family,” funded by tax-deductible donations and grants. In 2012 those gifts reached just over $3.5 million and in 2013 topped $4.1 million, according to IRS filings.

The husband and wife team who founded and run Liberty Counsel, Anita and Matthew Staver, were paid $137,758 and $153,591, respectively, in 2013. The staff of five ran up $184,479 in travel expenses that year and spent $429,584 on conferences, conventions and meetings. Liberty Counsel paid one independent contractor over $600,000 for “email alert services,” and another almost $500,000 for printing and mail services. “Case costs,” were reported at $105,487. Liberty’s attorneys know they can’t win the case in Rowan County. Same-sex marriage is legal since the Supreme Court’s June 26 decision and it’s Davis’ job to issue marriage licenses. So, why is Liberty Counsel marching alongside Davis in this losing cause? It takes a lot to keep that marketing machine humming and those executives paid, and the only way to keep those donations coming is to stay in the news. For that purpose a losing cause is just as good as, perhaps better than, a winning one.

The piece concludes: “Davis can resign if she’s morally unable to issue the marriage licenses while the appeal is pending. Law-abiding, taxpaying Rowan County citizens have been denied their constitutional rights for almost two months while Davis has kept her job and Liberty has ginned up its marketing machine.”