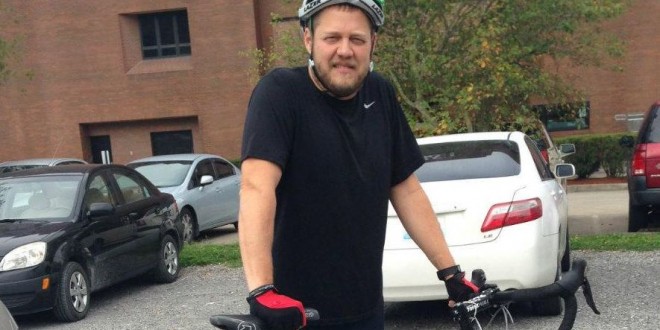 Anti-gay Kentucky county clerk Casey Davis, who says the he’ll die to stop gay marriage because homosexuals deserve to know they are going to hell, has launched a new stunt. Via the Associated Press:

Casey County Clerk Casey Davis has begun a bike ride across Kentucky to bring attention to the circumstances of Rowan County Clerk Kim Davis, who has refused to issue marriage licenses, despite an order from a federal appeals court that upheld a judge’s directive to issue the licenses. Kim Davis has cited her Christian belief against gay marriages and declared she would refuse licenses to all couples, gay or straight, despite a U.S. Supreme Court ruling that legalized gay marriage. A statement from The Family Foundation says Casey Davis set off at 4:30 a.m. in Pikeville in the eastern part of the state and plans to ride to Paducah, in the western part of the state. According to Google maps, it would take 44 hours to cycle from Pikeville to Paducah, which is 461 miles. “I cannot let my sister go to jail without my doing something to let others know about her plight,” Casey said in the statement. Although the two are not related by blood, The Family Foundation says they are bonded by religious conviction.

This morning Davis swung by the Rowan County courthouse to greet the supporters of Kim Davis, who came out to meet him.

The Rowan County Clerk came outside to welcome Casey Davis, who began his trek Thursday morning. The Casey County Clerk showed some emotion as he spoke about his journey. The two of them, who are not related, but say they are brother and sister in Christ, spent about 30 minutes inside the Rowan County Clerk’s office. “I don’t hate these people. Kim doesn’t hate these people. Kim is not trying to keep them from getting what they want,” Casey Davis said. “I mean, I’ve driven a bike across how many counties? They can drive in a car much easier today and go get that if that’s what they want.” Mary Hargis, who supports same sex marriage, said she was there Friday to show “we support our LBGT community and we want them to know that we care and every time they walk through those doors and are denied we are here for them.” While the rally for the clerks wrapped up after the two met, those supporting same sex marriage say they will be outside the courthouse as long as the clerks office is open. A rally in support of gay marriage is scheduled for 9 a.m. to noon Saturday outside the Rowan County courthouse.