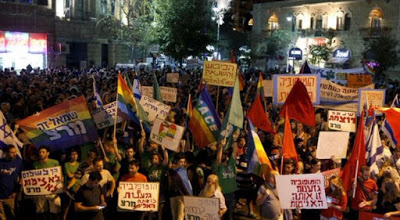 LGBTQ rights groups and youth activists were holding demonstrations in Tel Aviv, Jerusalem, and Haifa following the terror attack at the gay pride parade in the capital on Thursday, in which six people were wounded. Demonstrations were also being held in response to the Jewish terror attack late Thursday night that killed a Palestinian infant and critically wounded the other three members of his immediate family. Thousands attended the rally in Meir Park in Tel Aviv in solidarity with the LGBT community, which also marks six years since the killing spree at the Barnoar community center. Among those participating were Isaac Herzog and fellow Zionist Union MK Tzipi Livni, Tel Aviv Mayor Ron Huldai, and former president Shimon Peres.

“I cannot believe we have reached such an abyss,” said Peres. “I took before this stage six years ago, mere days after the murders at Barnoar. I am finding it difficult to believe that we are standing on that same stage, once again before the same phenomenon. We have gathered this evening for a war of independence – Israel’s independence from insanity and insane people. This is not a disagreement between right and left. This is a profound clash between those with a conscience and those who lack a conscience.” “It is appropriate on this evening to remove the masks,” continued the former president. “Anyone who calls the pride parade a ‘beast parade’ should not be surprised when a knife is raised at a 16-year-old old girl.”

Speaking at the rally in Jerusalem, Israeli President Reuven Rivlin denounced the “Jewish terrorists” behind the attack. Opposition leader Isaac Hertzog called for the Israeli government to classify the far-right anti-gay group Lehava as a terrorist organization. (Lehava is a Hebrew acronym for “Stop Assimilation in the Holy Land.”) Speaking at the Tel Aviv rally, Meretz Chairwoman Zehava Gal-On called the attacker on the parade a member of “Jewish ISIS.”