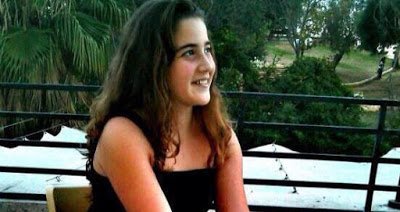 Three days after being critically wounded by an ultra-Orthodox man that went on a stabbing rampage at Jerusalem’s Gay Pride Parade, Shira Banki, a 16-year-old Israeli teen succumbed to her wounds Sunday afternoon. Five other people were wounded in the attack. Police confirmed that the suspected stabber is Yishai Schlissel, a Haredi man from Modiin Ilit who stabbed three participants in the 2005 Gay Pride march. He was recently released from prison after serving a 10-year sentence. Banki was a high-school student from Jerusalem, studying at the Hebrew University High School. She took part in Thursday’s parade to show solidarity with her LGBT friends. She is survived by her parents and three siblings; her family decided to donate her organs.

Shira’s family has issued a statement.

“Our magical Shira was murdered because she was a happy 16-year-old – full of life and love – who came to express her support for her friends’ rights to live as they choose. For no good reason and because of evil, stupidity and negligence, the life of our beautiful flower was cut short. Bad things happen to good people, and a very bad thing happened to our amazing girl. The family expresses hope for a less hatred and more tolerance.”