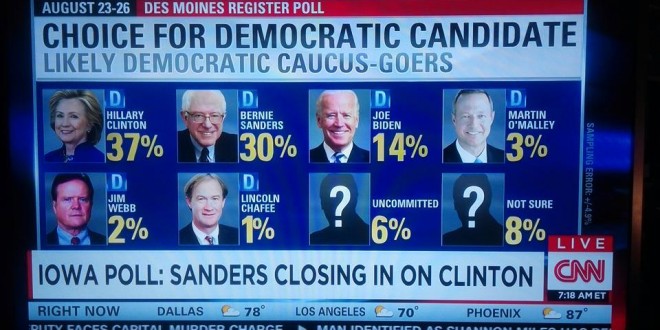 IOWA: Sanders Moves Up On Clinton

Hillary Rodham Clinton’s once-commanding lead in Iowa has shrunk to just seven percentage points, while Sen. Bernie Sanders, I-Vt., has surged in the state whose caucuses will kick off the race for the 2016 Democratic presidential nomination, according to a poll released Saturday evening. The Des Moines Register-Bloomberg Politics poll, considered the gold standard of Iowa surveys, found Clintonwith the support of 37 percent of likely Democratic caucus-goers, followed by Sanders at 30 percent. Vice President Joe Biden, who is contemplating a late entry into the race, came in third at 14 percent, while former Maryland governor Martin O’Malley was a distant fourth at 3 percent. Without Biden in the race, the poll showed Clinton leading Sanders, 43 percent to 35 percent.

Biden is expected to announce his decision in early October.