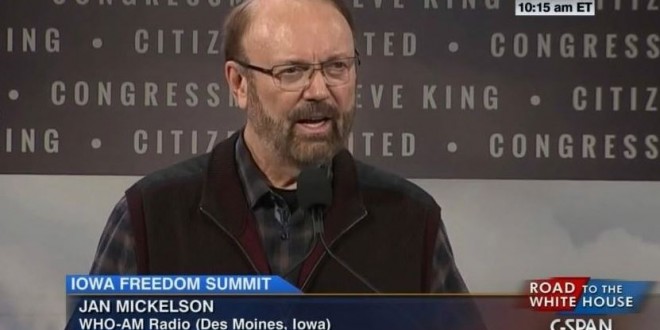 Virtually every 2016 GOP presidential candidate has recently appeared on the Iowa talk radio show of far-right extremist Jan Mickelson, who in the past has declared his allegiance to the Confederacy and called AIDS “God’s punishment for homosexuality.” But Mickelson may have some trouble booking future such guests after he unveiled his plan to literally enslave undocumented immigrants. Mediaite has the text:

“As of this date… 30 to 60 days from now anyone who is in the state of Iowa that who is not here legally and who cannot demonstrate their legal status to the satisfaction of the local and state authorities here in the State of Iowa, become property of the State of Iowa. So if you are here without our permission, and we have given you two months to leave, and you’re still here, and we find that you’re still here after we we’ve given you the deadline to leave, then you become property of the State of Iowa. And we have a job for you. And we start using compelled labor, the people who are here illegally would therefore be owned by the state and become an asset of the state rather than a liability and we start inventing jobs for them to do. You need to go home and leave this jurisdiction, and if you don’t you become property of the United States, and guess what? You will be building a wall. We will compel your labor. You would belong to these United States. You show up without an invitation, you get to be an asset. You get to be a construction worker. Cool!”

When a caller told Mickelson that his plan sounds like slavery, he responded, “What’s wrong with slavery?” Praise Jesus!