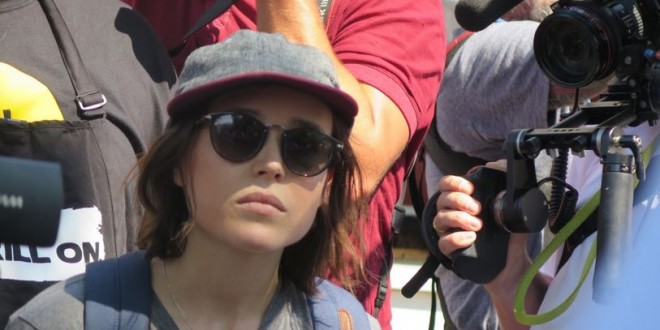 If you weren’t a fan of Ellen Page before, you will be now. ABC News reports:

While Sen. Ted Cruz was grilling pork chops at the Iowa State Fair today, actress Ellen Page, wearing a hat and sunglasses, snuck her way up to the grill and asked the GOP presidential candidate about “the persecution of gays in the workplace and LGBT rights.” ABC News caught the exchange. “What about the question about LGBT people being fired for being gay-trans?” Page asked. “Well, what we’re seeing right now, we’re seeing Bible-believing Christians being persecuted for living according to their faith,” Cruz responded. “You’re discriminating against LGBT people,” Page, 28, said. “Well, would you use that argument in segregation?” “Now I’m happy to answer your question, but not to have a back-and-forth debate,” said Cruz, a devout Christian who has said he believes that marriage is between one man and one woman. The Texas senator, 44, went on to argue today that “no one has the right to force someone else to abandon their faith and their conscience.” “Imagine, hypothetically, you had a gay florist and imagine two evangelicals wanted to get married and they decide, ‘You know what, I disagree with your faith and I don’t want to provide flowers,’” Cruz posed to Page. Cruz and Page, both Canadian-born, spoke for over five minutes. Afterward, ABC News asked Cruz whether he knew it was Page and he said no. He described the conversation to us as being about religious liberty.

The clip below was taken by a local news station and Page doesn’t appear on camera although you can hear her questions. Cruz will infuriate you with his dodging and deflecting.

In the exchange, Cruz, claimed that business owners were facing discrimination by being asked to serve all customers – including lesbian, gay, bisexual and transgender customers – equally. Contrary to his claims, HRC’s polling of self-identified LGBT Americans found that nearly two-thirds of LGBT people have experienced discrimination. Ted Cruz also bizarrely claimed that the abuses against LGBT people around the world are going unnoticed while suggesting that activists like Page made too big a deal of challenges in the U.S. In fact, the U.N. Security Council is scheduled to convene to discuss ISIS’s horrific violence against LGBT people in a special session this Monday, and the Human Rights Campaign is one of several organizations that proudly works to stem hate and advance LGBT equality around the world. “Ted Cruz showed today that he is living in another era where he thinks it’s acceptable to treat LGBT people differently and allow businesses to refuse service to someone just because of who they are, or who they love,” said JoDee Winterhof, Senior Vice President of Policy of Political Affairs. “Today Ted Cruz was served an important reminder that in a country like ours that values the free market economy, businesses should serve all law-abiding customers who can afford to pay equally, including lesbian, gay, bisexual and transgender people.”