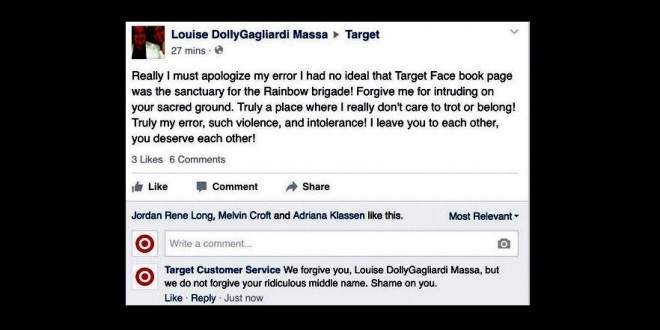 Using the Target logo and a fake name, a hilarious troll took to Target’s Facebook page to battle the haters who are ever so pissed about the company’s coming gender-neutral toy aisles. AdWeek has the details:

Brands can’t be as honest as they might like in dealing with haters on Facebook. But sometimes other Facebook users can do it for them. That dynamic played out in particularly rogue fashion on Target’s Facebook page this week. As the retailer received a steady stream of nasty comments from people upset about its move toward gender-neutral in-store labeling, Facebook user Mike Melgaard posed as Target with a fake Facebook account—Ask ForHelp, with a bull’s-eye profile pic—and began excoriating the haters with comically sarcastic replies. He got away with it for about 16 hours, too, commenting on about 50 posts before the fake account was shut down.

Hit the link for many more examples. (Tipped by JMG reader Lynda)