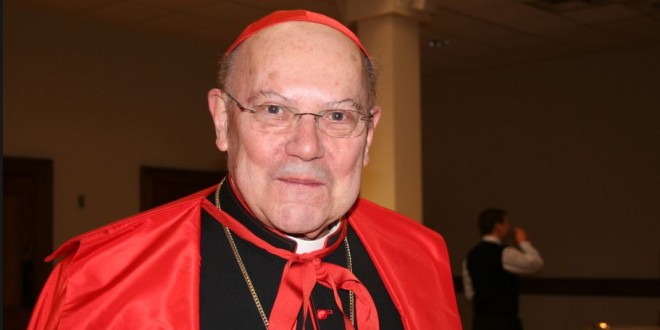 Cardinal William Joseph Levada, who was embroiled in several pedophile-shielding scandals and was once second only to the Pope in the Catholic hierarchy, has been arrested for DUI while on vacation with “priest friends” in Hawaii. The Hawaii Tribune-Herald reports:

“I regret my error in judgment. I intend to continue fully cooperating with the authorities,” Levada said in an email statement issued Monday by the Archdiocese of San Francisco. Levada, the former Archbishop of San Francisco, was appointed as a cardinal, a prince of the church, on May 13, 2005, by Pope Benedict XVI, just weeks after his election as pontiff. He was the first U.S. prelate to lead the Congregation for the Doctrine of the Faith, the Vatican’s powerful guardian of doctrine. He now holds the title of Prefect Emeritus of the Conclave of the Faith since his retirement as prefect in July 2012. He also was a member of the conclave that elected Pope Francis in March 2013. Levada drew fire in 2013 after coming to the defense of Los Angeles Cardinal Roger Mahony, who was stripped of his public duties over his handling of the priest sex abuse crisis in the church, but still allowed to select a new pope, saying some priest abuse victims groups who have criticized Mahony may never be satisfied with the church’s response to the crisis. “There are some victims groups for whom enough is never enough, so we have to do our jobs as best we see it,” Levada said at the time, according to Associated Press. “He has apologized for errors in judgment that were made. I believe he should be at the conclave.” Levada was on vacation with priest friends when the DUI arrest occurred, according to archdiocese spokesman Michael Brown.

Levada is the former Archbishop Of Portland, which in 2004 became the first US archdiocese to declare bankruptcy after paying $53 million to the victims of pedophile priests. (Tipped by JMG reader Nic)