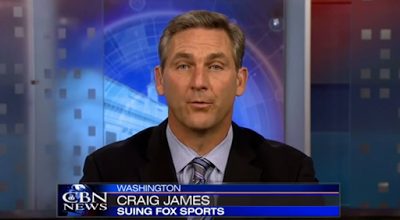 Former New England Patriots running back, failed US Senate candidate, and current Family Research Council staffer Craig James has filed an employment discrimination lawsuit against Fox Sports, alleging that the network fired him as a commentator over his Christian stance on same-sex marriage. Yahoo News reports:

In 2013, Fox Sports Southwest fired James two days after it hired him upon learning of a statement he made in 2012 while running for the U.S. Senate. During a debate that involved Dallas Mayor Tom Leppert and Ted Cruz, James said that being gay is a choice and that “right now in this country, our moral fiber is sliding down a slope that is going to be hard to stop if we don’t stand up with leaders who don’t go ride in gay parades. I can assure you I will never ride in a gay parade.” Fox Sports Southwest Senior Vice President of Communications Lou D’Ermilio took issue with the comments. “We just asked ourselves how Craig’s statements would play in our human resources department. He couldn’t say those things here.” The suit, which was filed Monday morning, claimed James was fired “because of his religious beliefs about marriage and his expression of those beliefs.”

James’ suit claims that he “shows love and kindness to all those around him” including his LGBT friends and family members. That claim might come as a surprise to his LGBT friends and family members who happened to be listening as he guest-hosted on Tony Perkins’ radio show in December, when he told a caller that he wasn’t really sure whether gay people should be executed.

Previous Shamir: Unplugged On NPR
Next The Death Of Hitchbot