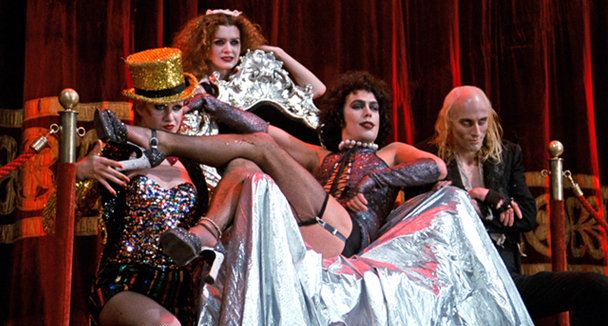 Dr. Scott! Janet! Brad! Rocky! Ugh! The movie version of The Rocky Horror Picture Show opened on this day in 1975. Via Digital Spy:

On its most basic level, Rocky Horror is a celebration of diversity, something midnight movie-goers took note of when 20th Century Fox started late-night screenings in ’76, where the film finally found its audience and became lauded as the cult curio it’s recognized as today. Though initially shrugged off by critics, Rocky Horror is now justly celebrated as a lipstick-smeared war cry against hatred and isolation. Its starry eyed musical delivery feels utterly unique – the closest anybody has ever come to replicating its heady brew of music and gender-play is John Cameron Mitchell with 2001’s Hedwig and the Angry Inch (even 1981’s psuedo-sequel Shock Treatment, by the same creative team, failed to capture the same furore). Forty years on, Rocky Horror‘s tongue-in-cheek message of acceptance is as relevant and powerful as it ever was, which perhaps partly explains why it’s that rare thing in the movie world; a true phenomenon.

Previous LIVE VIDEO: American Flag Rises Over US Embassy In Havana For First Time In 54 Years
Next Freep This Colorado Poll