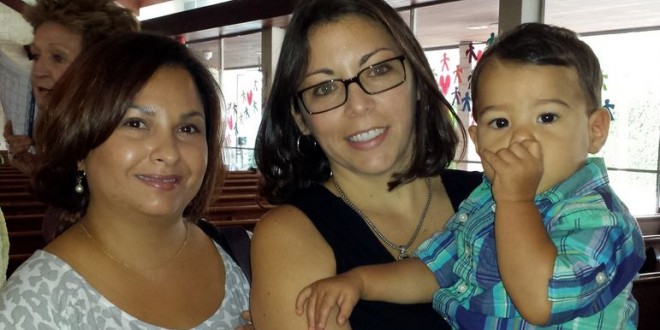 The National Center for Lesbian Rights has already filed a lawsuit. Via press release:

Just days ago, Cathy Pareto and Karla Arguello—the first same-sex couple to be married in Florida—celebrated the birth of their twin son and daughter. But the couple’s joy was soon mixed with fear and frustration when the hospital denied Cathy the right to add her name to the children’s birth certificates. Almost a year since Florida’s marriage ban was declared unconstitutional, the Florida Bureau of Vital Statistics is still refusing to allow hospitals to list both same-sex parents on their baby’s birth certificate. Today, Cathy and Karla, who were lead plaintiffs in Florida’s marriage lawsuit, are joining two other married same-sex couples in a federal lawsuit challenging Florida’s refusal to issue them accurate birth certificates listing both spouses as parents of their children. Equality Florida, the largest organization representing lesbian, gay, bisexual, and transgender Floridians, is also a plaintiff in the case. “Attorney General Pam Bondi could have avoided yet another costly lawsuit by directing all state agencies to simply comply with the law. Instead she turned her back on repeated requests to take action,” said Nadine Smith, Executive Director of Equality Florida. “Birth certificates are the first official document that represent a new born baby’s family. Having an inaccurate birth certificate hinders parents’ ability to take care of their child and access important legal benefits and protections. Denying our families this is not only spiteful and harmful, it is illegal.” The other couples in the lawsuit are Debbie and Kari Chin of St. Petersburg and Yadira Arenas and Alma Vezquez of Winter Haven. The plaintiffs are represented by the National Center for Lesbian Rights (NCLR) and Florida attorneys Mary Meeks and Elizabeth Schwartz.

And you thought we’d heard the end of Pam Bondi.