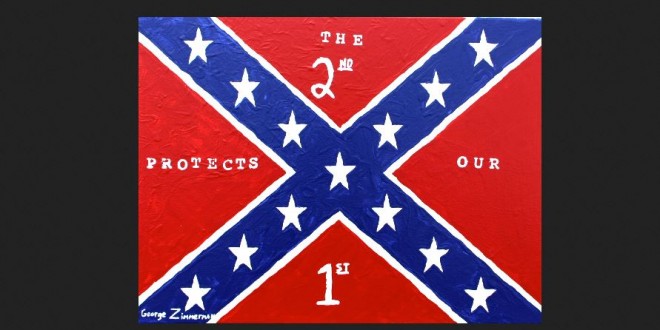 A Florida gun shop which recently declared itself to be “Muslim-free” is auctioning off a Confederate flag painting by George Zimmerman. TMZ has the story:

George Zimmerman is unloading a bunch of paintings that illustrate his take on the Confederate Flag controversy — and he’s even offering a bonus prize to one lucky art collector. Zimmerman is teaming up with Florida Gun Supply to sell signed and numbered prints of his Confederate Flag painting to help pay legal costs for his friend. The ad on Florida Gun Supply’s website says anyone who buys a print will be entered to win the original painting of Zimmerman’s stars and bars (which could be worth up to $100,000!). The last Zimmerman original — an unflattering portrait of prosecutor Angela Corey — was sold for $100k through eBay … so, it’s a good bet this more controversial painting could be worth the same.

Half of the proceeds will go to Zimmerman and half will go to the owner of the gun shop, who is being sued for religious discrimination by a Muslim group.