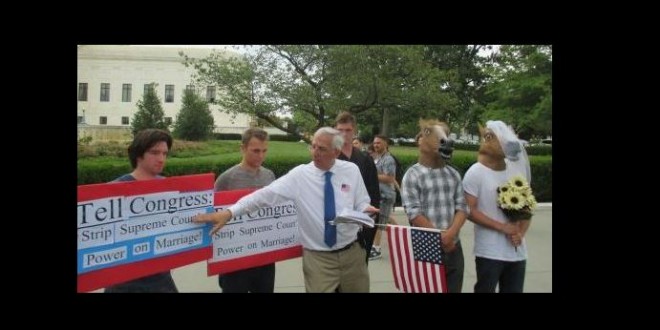 We haven’t heard from ole Eugene Delgaudio in awhile, but last week he corralled (diggity) some supporters to paw the ground outside the Supreme Court with him while he brayed a statement to Congress. We presume no press actually attended this press conference. From Delgaudio:

“The radical Homosexual Lobby thinks Public Advocate and thousands of other pro-Family activists will just give up and quit. We are here today to assert “We will never stop fighting for Real Marriage.” One bill we are supporting is Representative Steve King (R-IA) bill to shred the Supreme Court’s power to destroy Real Marriage. King’s “Restrain the Judges on Marriage Act” (H.R. 1968) will remove marriage from federal court jurisdiction and ban any federal funding used to enforce court orders against Real Marriage. Public Advocate is collecting thousands of signatures today on petitions asking for the passage of HR 1968 to strip the Court of power over traditional marriage.”

The event was called short when earring-wearing long-haired warehouse workers spotted Eugene from a passing truck.