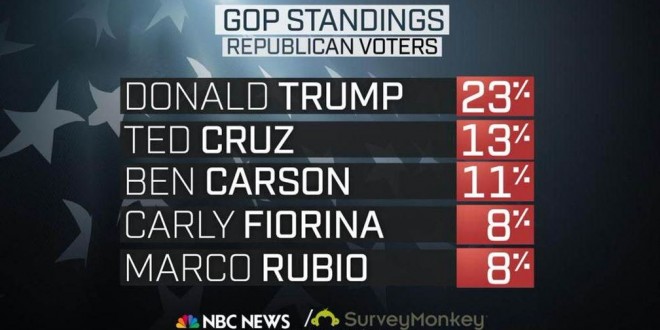 If Donald Trump’s comments about Fox News anchor Megyn Kelly are hurting his standing in the Republican primary, it’s not showing in the numbers. According to the latest NBC News Online Poll conducted by SurveyMonkey, Trump is at the top of the list of GOP candidates that Republican primary voters would cast a ballot for if the primary were being held right now. The overnight poll was conducted for 24 hours from Friday evening into Saturday. During that period, Donald Trump stayed in the headlines due to his negative comments about Kelly and was dis-invited from a major conservative gathering in Atlanta. None of that stopped Trump from coming in at the top of the poll with 23 percent. Sen. Ted Cruz was next on the list with 13 percent.

Note that Carly Fiorina has jumped into the top ten.