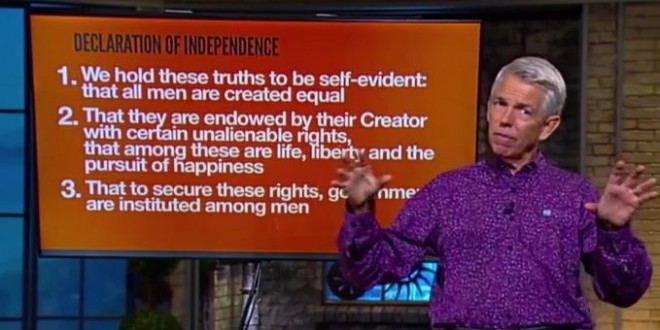 David Barton: America’s Founding Documents Came Out Of The Bible So Separation Of Church & State Is “Nonsensical”

Glenn Beck brought right-wing pseudo-historian David Barton onto his television program last week so that he could deliver another one of his “history” lessons to Beck’s audience about how the Founding Fathers took all of the rights guaranteed in the Declaration of Independence and the Bill of Rights straight out of the Bible, specifically Genesis 1-8.  As Barton explained, the purpose of the Declaration was to declare that there was a God, that God created inalienable rights, and that government exists to protect these rights. As such, there were some two dozen rights listed in the Declaration, which eventually were codified into the Bill of Rights, and all of which were taken directly from the Bible. “They held that all of those came out of Genesis 1-8,” Barton said. “That’s what they looked to. Genesis 1-8, they went through and said, ‘Here’s the two dozen rights we see and that’s why governments exist.’ So this is the God factor and that’s what made of different from the beginning.” Beck, of course, was blown away by this revelation, as Barton declared that it is “nonsensical” for courts to protect the separation of church and state.