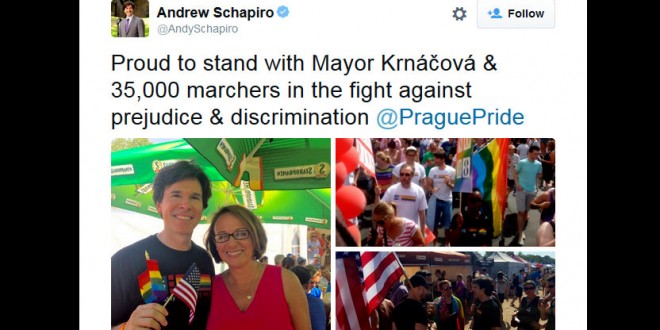 A couple of years ago a veritable who’s-who of American haters screamed their heads off when the US Embassy sponsored Prague Pride.  But this weekend the United States even had a FLOAT as the parade drew a record 35,000 participants. The Prague Post reports:

Prague Mayor Adriana Krnáčová (ANO) joined the march, the first time for a Prague mayor. It was actually her fifth time marching, but she was not mayor in previous years. She said she considers the march a key Prague event, just like the annual marathon. Celebrities included the 120-member London Gay Men’s Chorus, which sang disco hits and other classic club tunes and did some choreography. As in past years, the US Embassy was a main sponsor of the event. In previous years the embassy marched behind a banner but this year they upped the game with a float that played vintage dance tunes. Ambassador Andrew Schapiro threw buttons to the crowd and waved paper flags, seeming to be having a good time. Earlier in the week at the Pride opening concert he said that LGBT rights are human rights and the US supports human rights worldwide.

This is the final line from the above-linked report: “A rival March for the Family, authorized by Cardinal Duka and Christian Democrats including Deputy Prime Minister Pavel Bělobrádek drew 100 people, or 0.1 percent of the Pride turnout.” BOOM!

In the clip below you’ll the usual damnation and screaming from anti-gay protesters followed by a great performance by the London Gay Chorus.