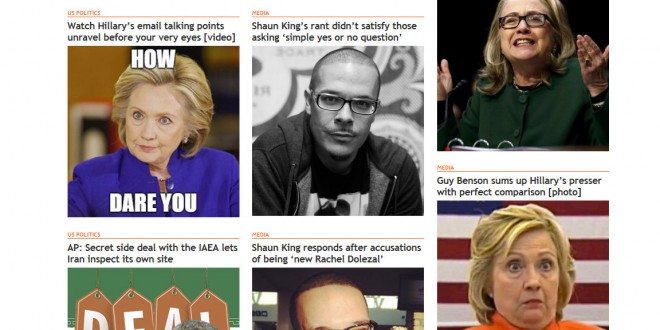 Cosmopolitan writer Jill Filipovic, herself a frequent target of Twitchy‘s army of far-right extremists, today lays out the truth about the site owned by online Christian powerhouse Salem Media. An excerpt:

While Twitchy’s content is tweet aggregation, its purpose seems to be filling insatiable reader rage. Many of the tweets posted to Twitchy are put on there seemingly for the express purpose of demonstrating how stupid or evil Twitchy believes the tweeter to be (although the site occasionally posts tweets from allies, cheering them on for shutting down enemies). The Twitchy team embeds the tweets into the posts, making it easy for their users to click through and engage with the tweeter directly. And “engage” they do.

“They sent hordes and hordes of people to my Twitter feed, [their readers] called Penn, it was like a nightmare,” Anthea Butler, a professor at the University of Pennsylvania whose tweets about race and religion have been posted to Twitchy several times, told Cosmopolitan.com. “You see it on the web, but when it’s directed at you, it’s a whole different thing. I’m an academic. When people are calling me ‘nigger’ and ‘bitch’ and ‘look at you, you’re just a fat slag,’ it’s all about your physiotype. I got a lot of ‘you’re dumb’ and ‘I don’t know why Penn would hire you because you shouldn’t be an Ivy League professor.’ I’m a very strong person, and although I did not lose faith in myself, I lost faith in humanity.”

Twitchy, Butler says, is not an equal-opportunity attacker: Going after liberals seems to be a part of their mission, but they also tend to single out women and people of color. She created a Tumblr showcasing some of the Twitter attacks she has received; much if it, she says, came immediately after Twitchy posted her tweets, and much of it is racist, sexist or both.

Read the full article for much, much more.