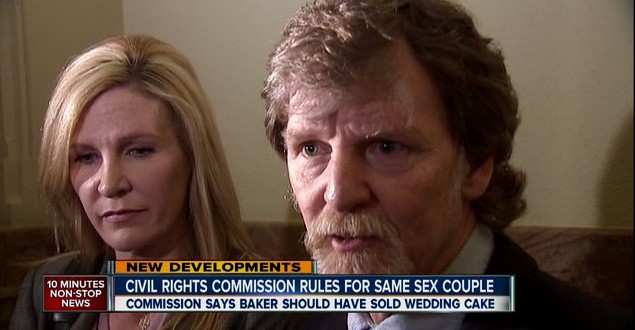 Yet another big win for the good guys! Via the Denver Channel:

The Colorado Court of Appeals says a Lakewood bakery owner cannot refuse to make wedding cakes for same-sex couples. The appeals court reaffirmed the Colorado Civil Rights Commission order from May that Masterpiece Cakeshop owner Jack Phillips cannot refuse to prepare wedding cakes for gay couples. Phillips’ attorneys asked the Court of Appeals to reverse the ruling, arguing the decision violates Phillips’ First Amendment rights. They argued he was not discriminating against same-sex couples, but rather refusing based on their intended conduct. Court of Appeals justices, however, pointed out that same-sex couples are the only kind likely to engage in same-sex marriage. “Masterpiece’s distinction, therefore, is one without a difference,” Thursday’s decision states. “But for their sexual orientation, Craig and Mullins would not have sought to enter into a same-sex marriage, and but for their intent to do so, Masterpiece would not have denied them its services.”

“Today is a proud day for equality and for upholding the law. In America, no one should be turned away from a shop or restaurant because of who they are or who they love,” said Ria Mar, staff attorney for the American Civil Liberties Union’s LGBT Project, who argued the case. “When every lesbian or gay person, every woman, every person of color, every person of every faith can walk into a store, a bank, a hospital, and know that they will get the same service as everyone else, we will have won. Until then, we continue to fight for the equal treatment we all deserve. Today we can celebrate this big win.” Colorado’s Anti-Discrimination Act prohibits businesses, such as Masterpiece Cakeshop, from refusing service based on factors including race, sex, national origin, or sexual orientation. The American Civil Liberties Union and the ACLU of Colorado filed suit on behalf of Mullins and Craig in 2013. In December 2013, an administrative judge ruled that the bakery had illegally discriminated against the couple. In 2014, the Colorado Civil Rights Commission affirmed that ruling. Masterpiece Cakeshop appealed.

Masterpiece was represented by perennial losers Alliance Defending Freedom, who have vowed to take the case to the Supreme Court. In April 2014 the Supreme Court rejected a similar appeal from the now-infamous New Mexico wedding photographer.

UPDATE: Alliance Defends is angrily tweeting out the ruling.