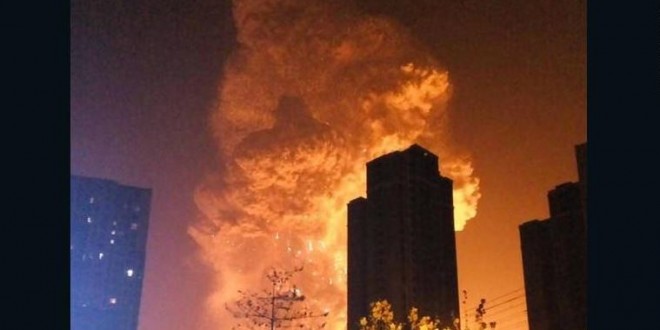 A massive explosion has hit China’s northern port city of Tianjin, reportedly injuring many people. According to Chinese state media, the explosion occurred when a shipment of explosives blew up at about 23:30 (16:30 GMT). Pictures and video shared on social media showed flames lighting up the sky and damage to nearby buildings. Latest reports in state media suggest that hundreds of people have been taken to hospital. Xinhua news agency said a fire started by the explosion was “under control” but said two firefighters were missing. Shockwaves from the blast could apparently be felt several kilometres away from Tianjin.

Tianjin is China’s fourth-largest city with a metro population of about 15 million. The explosion’s mushroom cloud was reportedly visible for 50 miles.