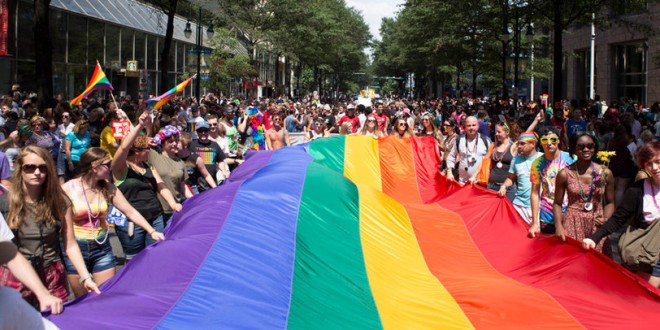 Every year anti-gay activist Michael Brown and hundreds of his red-shirted supporters wade into Charlotte Pride to scream damnation. This year they can expect a massive crowd. Via the Charlotte Observer:

One of the largest LGBT events in the South will take over uptown Charlotte this weekend, bringing in a predicted 100,000 people. Among the expected highlights is a Sunday parade with a record 2,700 registered participants, another indication that the local lesbian, gay, bisexual and transgender community is in a celebratory mood after the Supreme Court’s recent decision legalizing same-sex marriage. Organizers say this year’s event should be the largest gay pride event ever held in the Carolinas, based on the fact that the festival has set crowd records every year since 2011. “Charlotte is now home to the third-largest LGBT event in the South, and that’s something to be proud of when you consider this is only the third year we’ve had our parade as part of it,” said Matt Comer, who is in charge of marketing for the event. “That’s a testament to the growth of the LGBT community and the reshaping of this city. … It’s not all that long ago that people who might have been seen participating in a gay pride event here would have been fired the following day in this once-conservative church and banking town.”