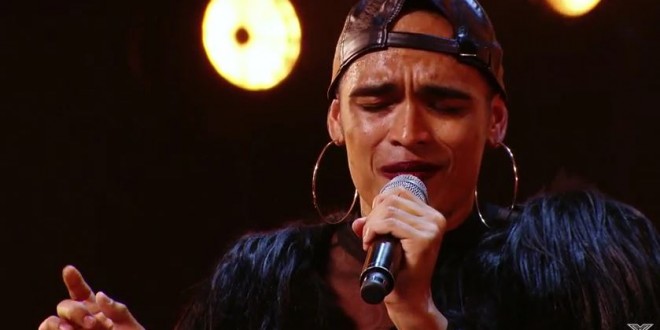 Seann Miley Moore brought the house down on the X Factor. The 24-year-old Australian’s audition began as potentially one of the hottest of hot messes when he walked out onto the stage, but somehow he managed to turn it all around and impress everyone. Take a hairy fur jacket, a PVC skirt, leather platform heels, sheer mesh top, metal waist-synching belt, hoop earrings, heavy make-up and a backwards baseball cap and you have an X Factor sensation before he’d even started singing. Seann, who revealed he moved to London from Australia to compete on the show, hit all the right notes with his version of Queen’s The Show Must Go On. After his crowd-wowing performance and incredibly powerful vocal, he sobbed as a tearful Ora told him: “There is nothing I can say to you apart from I am so happy you came on this show!” With a standing ovation from the crowd and the judges, the gushing comments just kept coming.

RELATED: Queen recorded the original as Freddie Mercury was in the final months of his battle against AIDS. Songwriter Brian May has been quoted as saying that the band was unsure that Mercury had the strength to perform the track’s challenging vocals. May: “And he went, ‘I’ll fucking do it, darling’ — vodka down — and went in and killed it, completely lacerated that vocal.” The lyrics contain references to Mercury’s determination to keep performing despite his impending death and to his declining physical appearance. (The official video for the track is a montage of Mercury in better days.) The single was released six weeks before Mercury’s death in 1991 and was certified gold in the US.