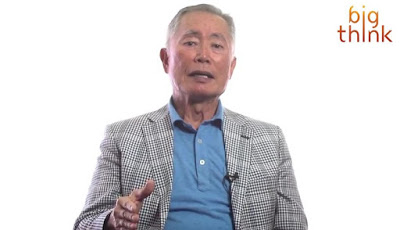 From the clip recap:

Actor, activist, prolific meme-generator, and cultural icon George Takei graces Big Think with his presence today in this powerful 5-minute clip. Takei explores Star Trek creator Gene Roddenberry’s ambitious and progressive vision for the future: “Roddenberry felt that the Enterprise was a metaphor for starship earth and the strength of this starship lay in its diversity.” We also learn that Takei’s character, Sulu, represented a united Asia free of the many strifes Roddenberry witnessed during the 20th century. Takei tells us how the name “Sulu” came about; it’s an incredibly inspirational story. Finally, Takei explains the now-glaring omission of gay and lesbian characters from Roddenberry’s progressive Enterprise. In short, it was the 1960’s and the biracial kiss between Uhura and Kirk nearly sank the show. Roddenberry knew there were limits to what the public would tolerate and he couldn’t risk losing his platform for social commentary by testing them. Thankfully, as Takei notes, times have changed quite a bit since then in so many ways. And Star Trek and Gene Roddenberry are partly responsible.