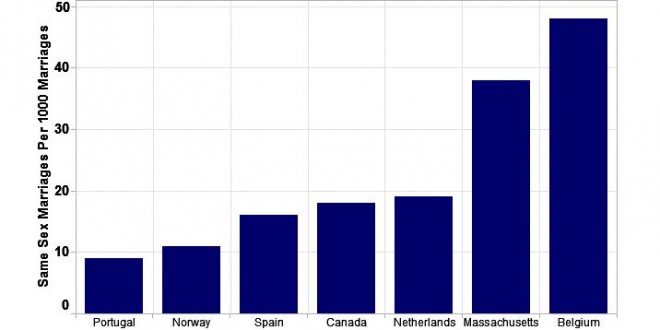 The Canadian statistics site 10 And 3 has examined same-sex marriage rates in several nations, comparing the number of weddings that took place two years after legalization in each country. Their analysis suggests that same-sex marriages happen at a lower rate in strongly religious nations. They write:

We dug into the numbers, and discovered that in some nations, like Belgium, same-sex marriages have become remarkably commonplace and are warmly accepted by fellow citizens as part of the cultural fabric of the community. On the other hand, in countries like Portugal and Norway, same-sex marriages remain surprisingly uncommon; for Portugal, this is due in part to the powerful influence of the Roman Catholic church in everyday life, while Norway’s low rate is a result of its longstanding (and popular) civil union laws, as well as the still powerful influence of the country’s Lutheran clergy. As recent court cases in the United States involving Christian wedding bakers and florists suggest, just because same-sex marriage is legal, it doesn’t mean that there is an accepting environment for it. In our analysis, we examined countries where marriage data (both same and opposite sex) is publicly accessible, and where same-sex marriage has been legal for at least two years (so that the marriage rate has time to stabilize after the initial post-legalization spike). This allows us to consider the nations of Belgium, Canada, the Netherlands, Norway, Portugal and Spain, as well as the US state of Massachusetts.

Hit the link for a breakdown on each country. Bear in mind that the data analyzed is as much as a decade old. They note that the Massachusetts number is skewed since so many couples from other states married there before it was legal in their home states.