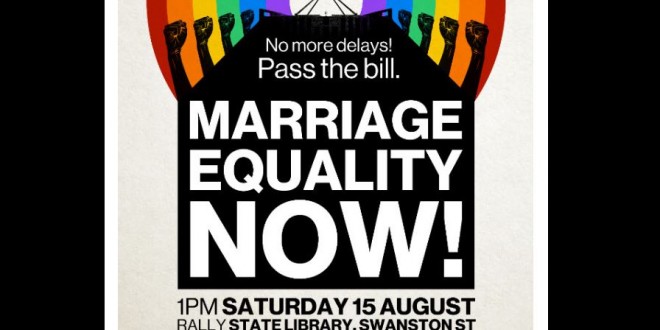 Furious with Prime Minister Tony Abbott’s threat to fire party leaders who vote for same-sex marriage, this Saturday activists will rally in Melbourne. Via press release:

This Saturday over 20,000 people will head into the Melbourne CBD to show their anger at Abbott’s manoeuvring to maintain homophobic discrimination in Australian law. Five reasons to join us and rally: 1. Eleven years of discrimination is too many; marriage is a civil right. 2. The U.S. and Ireland joined another 19 countries to extend marriage rights to all; Australia lags behind. 3. Politicians must be pressured to support public sentiment and vote “yes” to the upcoming Private Members Bill for marriage equality. 4. Send a strong message to Abbott: get out of the way of equality. 5. To encourage members on the right to CROSS THE FLOOR and vote ‘YES’ for equality. Following the rally we head to the steps of The Old Treasury Building for a mass wedding ceremony conducted by celebrant and The Australian Equality party’s Senate candidate Jason Tuazon-McCheyne.

So far three MPs have said that they will defy Abbott.

Queensland Liberal MP Teresa Gambaro has become the third member of the federal government to reveal they will cross the floor in support of same-sex marriage. This came as confusion swirled on Thursday about the government’s position on same-sex marriage and whether or not Prime Minister Tony Abbott would hold a referendum or plebiscite in any second term. Labor denounced outsourcing the question of marriage equality to a popular vote, saying it would cost at least $120 million. Ms Gambaro is co-sponsoring the cross-party bill to amend the Marriage Act that will still be introduced into the Parliament next week, despite the Liberal Party voting down a free vote for ministers. That decision means there will not be enough votes on the floor to pass the bill in this term of government.