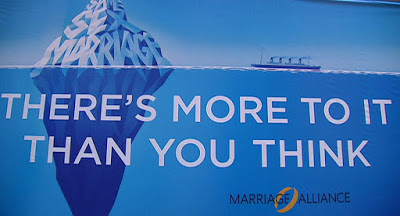 Backed by wealthy businessmen, The Marriage Alliance says it hopes its media campaign will encourage Australians to feel comfortable voicing their concerns about same sex marriage. The ad was unveiled at a launch today along with the campaign slogan “there’s more to it than you think”. The ad starts with a simple drawing that later becomes the tip of an iceberg. “Trying to achieve something big can feel like climbing a mountain,” it states. “It’s time to step back and consider all the issues around same sex marriage. Like how it will affect children or sex education in schools or what rights you could lose.” Ivan Hinton-Teoh the deputy director of Australian Marriage Equality which is in favour of same sex marriage described the ad as a last minute scare campaign. “This kind of desperate, eleventh hour scaremongering has failed to stop the momentum for marriage equality in other countries and it will fail in Australia as well,” he said. “It’s asking to have a conversation start where we’ve been going for ten years.”

Previous RNC To Vote On Anti-Gay Resolutions
Next GOP: Our Digital Team Is Ready For 2016