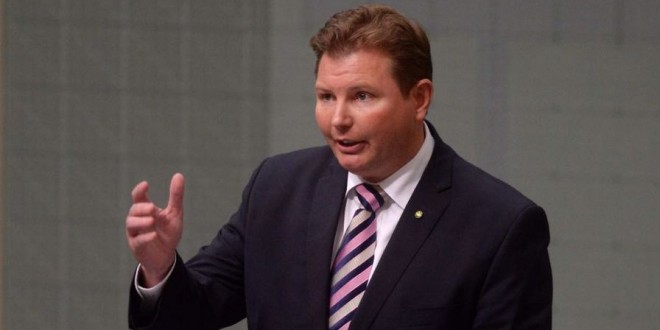 The Australian activist group GetUp sent glitter-filled letters to Parliament members who oppose same-sex marriage. One of them called the police who then sent in a bomb squad. The Guardian reports:

Police, bomb squads and hazardous material teams were called to investigate after a staff member of the Liberal backbencher Craig Laundy thought glitter in a letter about same-sex marriage might be suspicious powder. The staff member, who had recently had security training, picked up the MP’s post in western Sydney on Monday. Police were called in, then the New South Wales fire brigade, which called in hazmat teams. They, in turn, called the bomb squad. The letter had been part of a campaign on same-sex marriage organised by the advocacy group GetUp.

Laundy took to Twitter to explain, saying the package had been unopened when the police were called but it “clearly had a powder-like substance inside”. On Monday, he used his official Facebook page to thank authorities for the mammoth response. “6 police cars, 6 fire trucks and 1 Hazmat unit,” he wrote. “The emergency response today when my staff found a suspicious package in our PO Box was tremendous.” He continued: “It has since been discovered that it was a stupid stunt by GetUp. I’m all for organisations making contact with me, but to send any undeclared substance through the mail to the office of a member of parliament will inevitably cause alarm and divert important police and emergency services from their critical work. Thank you to Burwood [local area command] – NSW Police Force for their outstanding effort in undertaking a professional response to a grossly irresponsible act.”

Progressive activist group GetUp had sent the letter as part of a campaign to highlight the failure of Australia’s politicians to achieve marriage equality and it was only one of 99 glitter filled letters sent to senators and MPs from the Australian Parliament. The letters said GetUp’s members had bought the glitter to celebrate same-sex marriages in Australia which they had hoped would be able to take place before the end of the year. ‘But your party (not the kind you buy glitter for) messed with our plans,’ the letters read. ‘We’ve had to put those plans on hold – indefinitely by the looks of it, thanks to your party’s abject confusion on the issue. And we’re really not happy about it.’ The letter said the lawmakers were being sent the glitter as until same-sex marriage is legalized nobody can make use of it. However only the staff of Liberal backbencher Craig Laundy interpreted the letter as threatening and alerted the authorities, causing a brief terror scare.

GetUp has issued an apology: “GetUp would like to express its regret for this misunderstanding and confusion. We hope nobody was unduly concerned for an extended period by the glitter. Obviously we regret any undue concern that this caused or any time wasted, as it was merely a way demonstrate our concern for an important issue.”