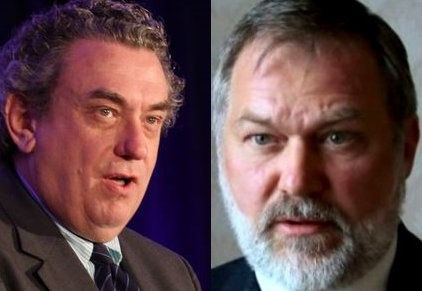 Austin Ruse To Scott Lively: You Can’t Sit With Us

Scott Lively is livid at fellow hate group leader Austin Ruse for “distancing himself” from the “boogeyman” that Lively has become. From Lively’s site:

When I first started reading Austin’s article I was pleased and excited. I thought finally one of the “titans” of the pro-family movement was going to come to my defense. But as I read on I realized that the whole article was designed to distance the “mainstream” movement from me because now that the “gays” have turned me into their ultimate “boogeyman” they’re trying to hurt the mainstream groups by suggesting they might somehow be associated with me. Marxist strategist Saul Alinsky taught his followers to 1) pick a target to be the symbol of their opposition, 2) freeze the target in place through unceasing propaganda, and 3) publicly destroy the target to set an example to those who oppose them. I’ve somehow become that target: the sacrificial scapegoat of the LGBT movement. And, short of a miracle of God, I will be publicly destroyed, if not through the “Crimes Against Humanity” lawsuit then by some other means. If we have learned nothing else about the agitators of the modern LGBT movement, we know they are as relentless and implacable as their ancient counterparts in Sodom, who would not desist from their siege of Lot’s home even though they were struck blind by God. I’ve done nothing to warrant being ostracized by fellow Christians like Austin. I’ve never advocated hate or violence against anyone. The accusations in the lawsuit and on the “gay” blogosphere are false. The facts I’ve exposed about the “gay” movement and history in my writings are true. I’m not a wild-eyed crazy like the late Fred Phelps. The only justification Austin and his associates have for shunning me is that I make them uncomfortable, and my plain-speaking gets in the way of their public relations schemes.

Here’s some of what Lively is screaming about:

Scott Lively apparently is an ordained minister, like Al Sharpton, though, like Sharpton, it isn’t entirely clear whether he, in fact, pastors. But that is irrelevant when you’re going for the trifecta; anti-gay, Christian, pastor. Who is Scott Lively? He has bummed around the pro-family movement for many years but has never really been accepted by the mainstream groups. I am told he does not work well with others. One major pro-family figure told me that Lively is just as happy attacking other pro-family people as he is going after the LGBTs. [Good As You blogger Jeremy] Hooper’s piece mentions that Lively was present at the Moscow planning meeting of the World Congress of Families and concludes that Lively had now been accepted by the likes of Alliance Defending Freedom, and Focus on the Family. What Hooper does not know and what has not been reported until now is that Lively’s presence at that meeting came as a surprise to many of the Americans present and that they strongly suggested that Lively not be invited back, which he wasn’t. He went on to found his own international group that hasn’t even made a ripple. It is odd to me that the gays make such a big deal about Lively because I have been active in international pro-family circles for going on twenty years and I had barely heard of him. I had never met him until he showed up at the Moscow planning meeting and I have never seen him since.

Previous Pat Robertson: Gays And Everybody Who Accepts Them Are Totally Going To Hell [VIDEO]
Next AUSTRALIA: Haters Thank Anti-Gay Pols With Flowers, Take Out Ads Against Marriage Equality Bill