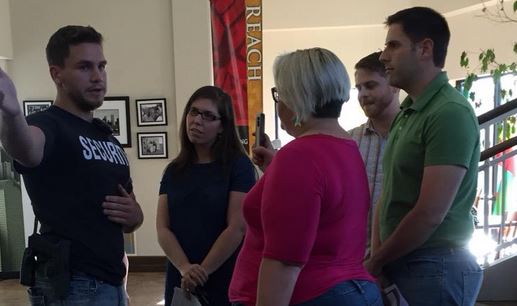 Thanks in large part to the work of the Duggar family, last December voters in Fayetteville, Arkansas repealed that town’s LGBT rights ordinance. Activists have placed another LGBT right bill on the ballot and last night four of them were booted out a “Protect Fayetteville” rally held at a Baptist church where martyred Oregon bakers Aaron and Melissa Klein spoke to the crowd of several hundred. The local NBC affiliate reports:

“We just feel that we also should have the right to you know not necessarily refuse a person but refuse an event,” Oregon Business Owner, Melissa Klein, said. Aaron and Melissa Klein are being sued for $135,000 in emotional damages after refusing to cater the wedding of a lesbian couple, back in 2013. The couple is in the process of appealing the lawsuit. “[The ordinance] leaves the door wide open to force people to adhere to something they don’t want to adhere to,” Aaron Klein said. City Attorney, Kit Williams, says Fayetteville’s proposed ordinance would exempt churches, religious groups and daycares. Ordinance 5781 protects business, living and employment rights of the LGBT community. Supporters of the anti-discrimination ordinance attending Tuesday night’s rally. “We were hoping we could come and listen and just get some insight into the opposition’s perspective,” Supporter, Danielle Weatherby, said. The group of four supporters were quickly asked to leave the ‘Protect Fayetteville’ rally. Fayetteville Police were eventually called to the event and escorted supporters off the premises.