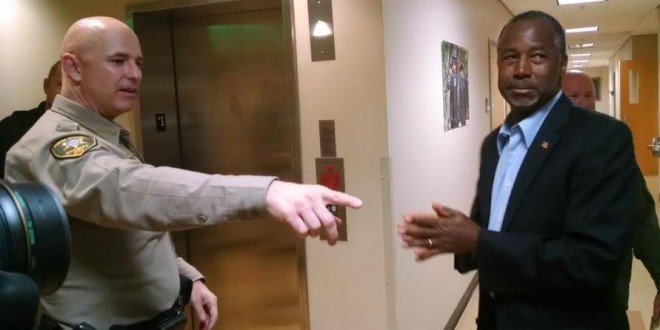 Ben Carson is heading to the Arizona border today to help homocon Sheriff Paul Babeu figure out how to stop Babeu’s future Mexican boyfriends from getting into the country. In March 2012 the Mexican ex-boyfriend of Babeu sued him for $1M, alleging that Babeu had threatened to have him deported if the boyfriend were to out him. Babeu’s run for the US House fizzled shortly thereafter, but not before it was revealed that he had spoken at an event staged by a group that wants to end illegal and most legal immigration and wants to end automatic citizenship for children born in the United States. Last year Babue led a protest against migrant children during which “patriots” screamed and waved anti-immigrant placards as the children passed in government buses. Several weeks ago Babeu appeared on Fox News to defend Donald Trump’s racist attacks on Mexican immigrants. Babeu: “He’s tapping into the anger that I and every American should feel.”