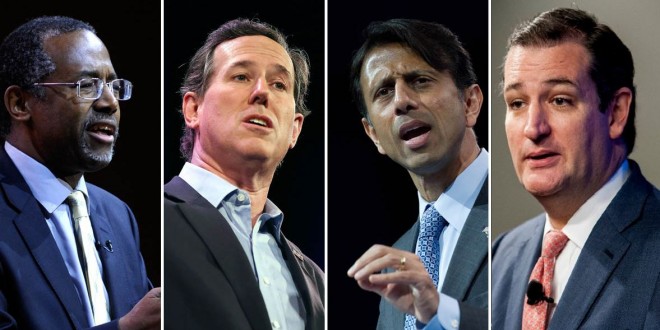 Another NOM Humiliation: Only Four Out Of 17 GOP Presidential Candidates Have Signed Their Hate Pledge

If you’ve been wondering why we haven’t heard much about NOM’s 2016 anti-LGBT hate pledge since it was launched over two months ago, now we know why. From Brian Brown:

The National Organization for Marriage (NOM) today identified four Republican presidential candidates they have dubbed “Marriage Champions” for having pledged to the American people that they will take several specific actions as president to restore marriage to the law and protect people of faith from discrimination because of their support for traditional marriage. NOM said that Sen. Ted, Cruz, Sen. Rick Santorum, Gov. Bobby Jindal and Dr. Ben Carson have emerged as the top candidates for marriage supporters. “Electing a president in 2016 who is a true champion on marriage is a critical priority, something that is essential if we are to overturn the outrageous, illegitimate decision of the US Supreme Court imposing same-sex ‘marriage’ on every state in the nation,” said Brian Brown, NOM’s president. “While many of the GOP candidates talk the talk about supporting marriage, these four candidates have distinguished themselves as true champions, having pledged to the American people to take very specific actions to advance the cause of marriage. NOM is committed to educating people about the importance of electing a true marriage champion as President of the United States.”

Mike Huckabee and Scott Walker won’t sign because they say they have a blanket ban on signing any pledges. CNN nails it:

The influence of the National Organization for Marriage — once a powerful force in funding pushes for same-sex marriage bans on the state level — has been in decline following a large swing in public support in favor of same-sex nuptials. According to Gallup, in 1996 nearly seven in 10 Americans opposed same-sex marriage, but in May 2015, 60% of Americans said they supported such unions. And in June, the Supreme Court ruled 5-4 that states must recognize same-sex marriage. “Electing a president in 2016 who is a true champion on marriage is a critical priority, something that is essential if we are to overturn the outrageous, illegitimate decision of the U.S. Supreme Court imposing same-sex ‘marriage’ on every state in the nation,” Brian Brown, president of the National Organization for Marriage, said in a statement

Here is the text of the hate pledge. As you can see, it covers a lot more than just marriage.

NOM Presidential Pledge: I [insert name of crazy person], pledge to the American people that if elected President, I will: One, support a federal constitutional amendment that protects marriage as the union of one man and one woman.

Two, oppose and work to overturn any Supreme Court decision that illegitimately finds a constitutional “right” to the redefinition of marriage. This includes nominating to the U.S. Supreme Court and federal bench judges who are committed to restraint and applying the original meaning of the Constitution, and appointing an attorney general similarly committed.

Three, conduct a review of regulatory, administrative and executive actions taken by the current Administration that have the effect of undermining marriage and work to restore our policies to be consistent with the proper understanding of marriage as the union of one man and one woman. Consistent with this, prevent the promotion of a redefined version of marriage in public schools and other government entities.

Four, support the First Amendment Defense Act and other legislation that recognizes the right of organizations and individuals to act in the public square consistent with their belief that marriage is the union of one man and one woman without fear of retaliation from the government.

Five, direct the Department of Justice to investigate, document and publicize cases of Americans who have been harassed or threatened for exercising key civil rights to organize, to speak, to donate or to vote for marriage and to propose new protections, if needed.