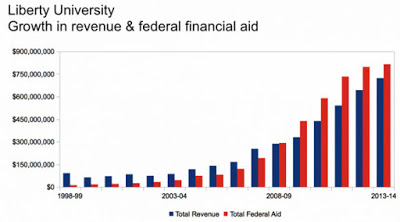 Where Liberty University Gets Its Money

Liberty University is not just your average school down the road. The once small Christian college founded in 1971 by the Rev. Jerry Falwell now has the largest student body of any private nonprofit university in the country. With over 70,000 students, the university has become a destination for political candidates seeking the GOP’s more conservative favor. Sen. Ted Cruz (R-Tex.) kicked off his campaign during a convocation at Liberty. In May, former Florida governor Jeb Bush (R) followed in the footsteps of John McCain and Mitt Romney by giving Liberty’s commencement address. The irony: The exponential growth of Liberty University has been fueled by billions in federal student aid made possible by President Obama and congressional Democrats. In the late 1990s, Liberty students received less than $20 million in aid. Students now receive over $800 million dollars a year in federal aid. As with any federal financial aid, the grants and loans are awarded to students, not the university. Liberty does not receive any other federal funds, but its growth has come by attracting Christian students who qualify for aid.