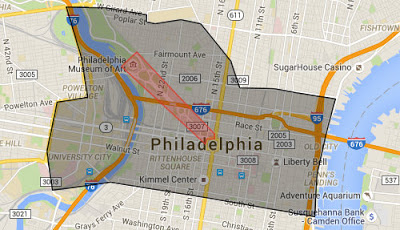 When The Pope Comes To Philadelphia

Philadelphia’s blogs are chattering about security measures and road closures slated for when Pope Francis visits at the end of September.

As far as the city is concerned, no-vehicle boundaries will likely fall as such: Girard to Ridge to Spring Garden to the north, South Street to the south, the Delaware River to the east and 38th Street to the west. Basically, “no vehicles in greater center city/ucity,” the source said. “That’s why we’ve been calling it the traffic box. No traffic.” West Philly boundaries remain a bit hazy for city planners, but they do know a Pope fence will go up around the Parkway, probably from the Art Museum to City Hall, about two blocks wide on either side. “Pretend it’s a blizzard,” the source said. “Nothing functions normally during a blizzard.” Here’s what that would look like, with the red area representing the fence that will be put up and the black area representing the full security boundaries. It’s still being worked out what those boundaries might mean for residents. Papal event consultants confirmed to PlanPhilly that the Ben Franklin Bridge between Philadelphia and New Jersey will be shut down, and they’ve even made suggestions that the city should, for some period of time, shut down I-95.

City planners are bracing for crowds of up to 1.5 million over the weekend. Residents of the affected areas have reportedly been told they should “plan to walk miles” to reach their usual destinations. The majority of the city’s rail system will be dedicated to express shuttles for papal worshipers and most regular stops will be bypassed. Craigslist is already seeing home rental listings for as much as $25,000 for the three-day papal visit. One optimistic fellow is asking $10K for his one bedroom apartment.

Previous Todd Starnes: Trump Has A Big Dick
Next No 2024 Olympics For Boston