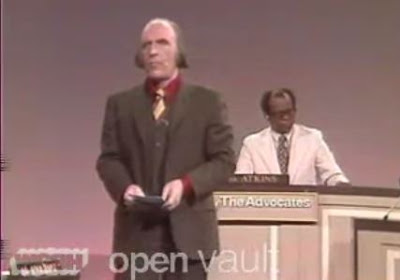 Click over to WGBH for their “Open Vault” presentation of a truly fascinating 1974 argument for same-sex marriage led by late gay rights pioneer Frank Kameny, who was honored in Philadelphia this weekend on the 50th anniversary of the nation’s first organized gay civil rights demonstration. The 1974 forum was staged in a trial format with Kameny calling as his first witness Elaine Noble, member of the Daughters Of Bilitis. Kameny’s second witness was Dr. Richard Green, who helped spearhead the APA’s declassification of homosexuality as a mental disorder. NARTH co-founder Charles Socarides was a witness for the anti-gay side. If you’ve not yet been convinced of Frank Kameny’s brilliance, this show will do that. His questioning of Socarides is especially enjoyable. (Tipped by JMG reader Paul)