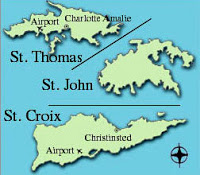 US Virgin Islands Fall In Line

The Virgin Islands have become the final US territory to comply with SCOTUS.

Governor Kenneth Mapp has announced that he’s currently working on an executive order to direct government agencies and departments to follow the U.S. Supreme Court’s June 26 ruling in favor of same-sex marriage. Mapp made the announcement during a Tuesday morning press conference at Government House, stating that upon taking office in January, he swore to uphold the laws of the land. “The Government of the Virgin Islands as a civil society can no longer discriminate on marriage,” Mapp said. “The nation has arrived, pursuant to the Supreme Court’s ruling, at full marriage equality — when two consenting adults appear for a marriage license and apply for that license, civil society is required to respond. And so persons of the same-sex can be married in the U.S. Virgin Islands.” The governor stressed that the U.S. Supreme Court’s ruling does not force churches and ministers to perform same-sex or any other kind of marriage, however as the territory’s leader, he must abide by the law.

The territory has a population of 106K.

Previous TEXAS: Half Of Counties Still Holding Out
Next Macy’s Dumps Trump