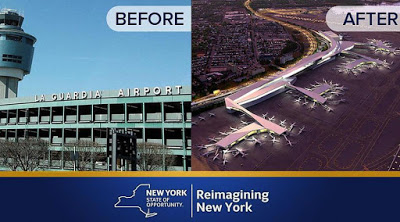 UNVEILED: $4B Plan For New LGA

As they might say on HGTV, LGA is a complete tear-down. Therefore, according to plans unveiled today, a completely new single $4B terminal will be built in the current parking lot, after which the ramshackle four old terminals will be razed. Gov. Andrew Cuomo and Vice President Joe Biden today held a joint press conference about the project, which is presently slated to begin early next year.  Lots of renderings are in the promo clip below.

RELATED: LGA is currently the 20th busiest US airport, just behind PHL and ahead of FLL. JFK, which is also in Queens, is ranked 5th with double the passenger volume of LGA. ATL remains, by far, the nation’s busiest airport with nearly double the traffic of JFK.