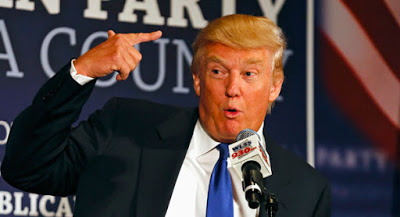 Trump Sues Univision For $500M, Mexico And Thomas Roberts Pull Out Of Pageant

For once Donald Trump has followed through with a lawsuit threat:

Donald Trump, a Republican presidential candidate, is suing Univision. The Spanish-language TV network dropped its coverage of Miss USA and Miss Universe — two beauty pageants that Trump co-owns — because of Trump’s remarks about Mexican immigrants during his presidential campaign announcement on June 16. NBCUniversal also dropped the pageant programming. NPR’s Andrew Limbong reports that Trump is seeking $500 million, and that in the suit, Trump claims Univision is attempting to suppress his freedom of speech. Here’s an excerpt from The Trump Organization’s statement: “Under the contract, Univision is required to broadcast the pageant live on television in Spanish. While Univision claims its decision came solely in response to comments by Mr. Trump during a June 16 campaign speech announcing his candidacy for President of the United States, the decision was, in reality, a politically motivated attempt to suppress Mr. Trump’s freedom of speech under the First Amendment as he begins to campaign for the nation’s presidency.”

Mexico has pulled out of the pageant.

The Mexican media company Televisa said it will not have a representative in the next Miss Universe pageant. Trump is a partial owner of the Miss Universe Organization, which oversees both the Miss Universe and Miss USA pageants. Televisa and former Miss Universe Lupita Jones help run Nuestra Belleza Mexico, a national pageant that determines the country’s contestant for Miss Universe. Jones lashed out at Trump for his “racist comments.” “As a Mexican I feel very offended and outraged, like everyone else – as Miss Universe I think Donald Trump is harming the organization,” she wrote on Twitter.

Pageant host Thomas Roberts, who was heavily criticized for hosting the 2013 pageant when it was held in Russia, has also pulled out as has co-host Cheryl Burke. On Monday NBC announced it will not air either Miss Universe or Miss USA, which takes place in Baton Rouge on July 11th despite the lack of a broadcasting partner.