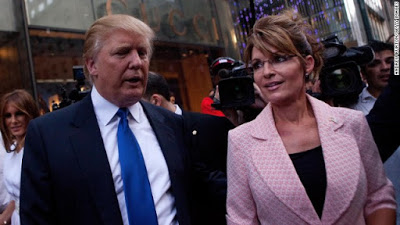 Donald J. Trump appears to be making a serious play for the “Mama Grizzly” vote. This week the Republican presidential candidate flattered Sarah Palin — who gave herself the bear of a nickname — calling her a “strong” and “special” person and proclaiming that he would love to have her in his cabinet if he won the White House. On Thursday, Mr. Trump showed another sign of respect for Ms. Palin, hiring Michael Glassner to be his campaign’s national political director. Mr. Glassner was chief of staff for Ms. Palin’s political action committee and worked closely with her when she ran for vice president alongside Senator John McCain in 2008. “Mr. Glassner will certainly be an asset to us as we further cement our dominance in the 2016 G.O.P. field,” Mr. Trump said in a statement.

The above-linked reports notes that Palin’s fans are flooding her Facebook page, which has “become a platform for pushing a Trump/Palin ticket.”