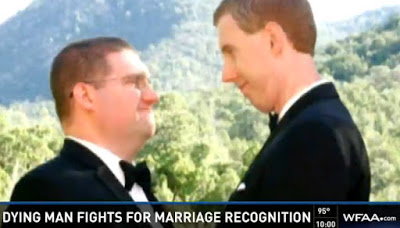 More than a month after the U.S. Supreme Court legalized same sex marriage, Texas is not fully recognizing the landmark ruling and refuses to issue death certificates that recognize same-sex marriages. “It looks to me like we’re headed back to federal court,” said widower John Stone-Hoskins, 36. He plans to file a lawsuit against the state on Monday, asking a judge to force Texas to let him change his late spouse’s death certificate to reflect their marriage. “We want to make sure in his lifetime his marriage to James [Stone] is recognized. He deserves that much,” said Neel Lane, attorney with Akin Gump, LLP.

Hoskins and Stone exchanged vows in New Mexico last August. But by mid-January, after a diagnosis with a genetic autoimmune disease called Sjögren’s syndrome, James, 32, decided to take his own life. “As you can see here, the marriage certificate is nice and framed,” said Stone-Hoskins. “The death certificate totally dismisses the fact that we were ever married.” Hoskins, who lives in Conroe, said that’s what hurts. James’ Texas death certificate lists him as single and refers to John as “significant other,” meaning he is not entitled to his spouse’s estate.

A video report is at the link.

Previous Matt Baume: A Salute To Sissies
Next You Are Causing Earthquakes! Again!