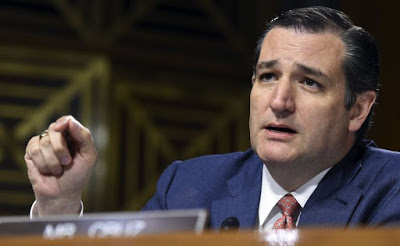 Yesterday Ted Cruz convened a hearing before the Senate Judiciary Subcommittee on Oversight, which he chairs, in order to call for reining in the “judicial tyranny” of the Supreme Court. One of the three witnesses he called was NOM chairman John Eastman. MSNBC reports:

Eastman agreed with Cruz’s proposals on judicial term limits and retention elections, but added one more “check” to the judicial branch – that states be given the ability to override “egregiously wrong decisions of the Supreme Court.” Cruz seemed interested in the idea, and asked for Eastman to elaborate. “The massive transfer of power from states to the federal government that came in the wake of the Civil War … unmoored the courts,” Eastman said. “A simple majority of the states ought to be able to override those kinds of decisions of the Supreme Court.”

The irony of such prescriptions was undoubtedly not lost on many of those watching Wednesday’s hearing. In order to correct what Cruz views as a series of decisions that have no basis in the U.S. Constitution, as well as what he considers to be an unconstitutional transgression by the justices into the realm of policy making, Cruz entertained several solutions – such as judicial term limits, retention elections, and state or Congressional overrides of “egregiously wrong decisions” – that would serve to dramatically alter the U.S. Constitution, not restore or strengthen it,

Today Cruz posted his opening statement to his presidential campaign channel on YouTube.