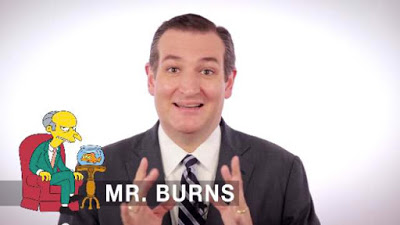 Ted Cruz Auditions For The Simpsons

Via the AV Club:

The Germans, as they so often do, have a word for a highly specific, immediately recognizable sensation that nevertheless has no English-language equivalent. This particular word is fremdscham, the cringing secondhand embarrassment you feel when someone is obliviously making a fool of himself, and Ted Cruz has revealed himself to be a natural at generating it. The presidential candidate and Tea Party favorite did some of the worst Simpsons impressions you’ve ever heard for BuzzFeed, as part of a mock audition to replace departing cast member Harry Shearer. Nitpickers might point out that Shearer didn’t voice Homer or Lisa Simpson, but that doesn’t stop Cruz. In just over one extremely painful to watch minute, Cruz appears dead set on developing counter-evidence to a separate BuzzFeed piece about his supposed savvy at viral campaign strategy. According to that article, Cruz and his team agreed to do the video on the fly and had just a few minutes to go over the script, which definitely checks out once you’ve seen the impressions. Still, neither his Mr. Burns, Ned Flanders, Homer, Lisa, nor Kang-as-Bill Clinton manages to be quite as fremdscham-inducing as his rendition of “Amazing Grace,” so there is that.