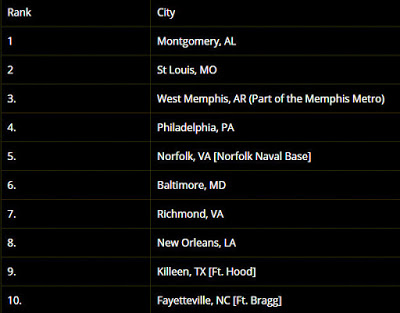 A website that sells apartment rental agreements has, for some reason, compiled CDC data to rank US cities by incidence of STDs per capita. HIV is not included in their ranking. They write:

Despite our puritan heritage, Americans really love to have sex. It turns out, a lot of us like to have sex without protection, too. Using publicly available data sources, we’ve mapped sexually transmitted diseases across most major cities in the USA. The military helped cities rank strongly in the top 10, with Norfolk Naval Base, Ft. Hood, and Ft. Bragg all pushing their cities to the top. The data used here comes from the CDC for 2013, and reflects reports of syphilis, gonorrhea and chlamydia. (Herpes data is not collected). To normalize the data, we measured rates per 100,000 people. We chose only to show cities with a significant amount of population, so rural counties are not show on this map. Specifically, we only ranked cities with a population of at least 50,000 or more. We ignored absolute STDs and only used the rate per 100k to establish rankings. We opted to treat Washington, DC. as a city and not a state. We also chose to represent each borough of NYC separately.