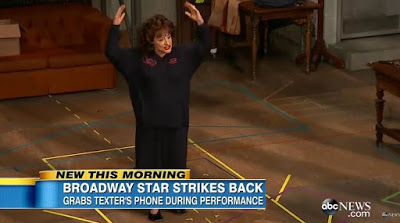 “This woman — a very pretty young woman — was sitting with her boyfriend or husband. We could see her text. She was so uninterested. She showed her husband what she was texting. We talked about it at intermission. When we went out for the second act I was very close to her, and she was still texting. I watched her and thought, “What am I going to do?” At the very end of that scene, we all exit. What I normally do is shake the hand of the people in the front row. I just walked over to her, shook her hand and took her phone. I walked offstage and handed it to the stage manager, who gave it to the house manager. I don’t know why they buy the ticket or come to the theater if they can’t let go of the phone. It’s controlling them. They can’t turn it off and can’t stop looking at it. They are truly inconsiderate, self-absorbed people who have no public manners whatsoever. I don’t know what to do anymore. I was hired as an actor, not a policeman of the audience. It’s getting worse. I’m hired to tell a story, and it takes a lot of effort and work to do that convincingly. It’s a handful of people who destroy that experience for everyone. It’s heartbreaking. Theater is not a social event.”

Previous Bear Proposal At Comic-Con!
Next Mat Staver: Obama Made Me Weep With His “Cloak Of Sin” Over The White House