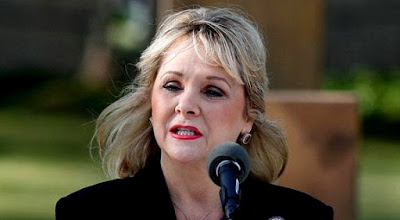 According to Oklahoma Gov. Mary Fallin, the Ten Commandments monument on the grounds of the state capitol is not an endorsement of Christianity but a “tribute to historical events.” So it stays where it is. CNN reports:

“Oklahoma is a state where we respect the rule of law, and we will not ignore the state courts or their decisions. However, we are also a state with three co-equal branches of government,” Gov. Marry Fallin said in a statement Tuesday. Fallin said the state attorney general has filed an appeal, while the legislature pursues changes to the state Constitution that makes the monument legally permissible. “During this process, which will involve both legal appeals and potential legislative and constitutional changes, the Ten Commandments monument will remain on the Capitol grounds,” she added. Last week, the state Supreme Court ordered the monument removed because it violates the state’s constitutional ban against the use of public funds or property to benefit a religion.

Some supporters of the monument have suggested selling the ground underneath it to a private citizen or group.

RELATED: In December 2013 Fallin denied spousal benefits to both straight and gay Oklahoma National Guard members rather than comply with the edict handed down by then-Defense Secretary Chuck Hagel. In 1998 then-Lt. Gov. Fallin divorced her first husband shortly after her Oklahoma Highway Patrol bodyguard was alleged to have had an affair with her.

Previous Janet Porter: I Prayed Bush Into Office And Can Pray Away Obergefell Ruling
Next TURKEY: Islamic Youth Group Posts “Kill All Gays” Messages In Ankara